Did your ancestor arrive free but have a colonial conviction?

Early newspapers, many which have been digitised on the National Library of Australia web-site, and the ‘Guilty or Not Guilty’ Series of books are worth checking to see if your ancestor may have found himself, or herself, before a Colonial Court or a Magistrate. Trial accounts can give such a lot of detail. There are a number of other records at GSQ which may enlighten you as to whether or not your ancestor had a colonial conviction.

It was not only transported convicts who were sent to places such as Norfolk Island and Moreton Bay. The records of the hulk Phoenix which was moored in Lavender Bay in Sydney show that re-offending convicts as well as people who arrived free, and indeed some who were born in the colony were sent to the hulk to be transferred to other penal settlements.

The microfilms pertaining to the hulk Phoenix (which have been indexed by Convict Connections) contain a lot of names as well as some useful information regarding where the men came from. For example: 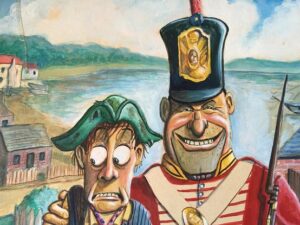 Did your ancestor arrive as a convict and also have a colonial conviction?

A colonial conviction for a transported convict meant that as a re-offender he/she would have been sentenced to one of the harsher penal colonies.

Was your ancestor a soldier or a marine who was court martialled?

Some soldiers and marines were tried and convicted in places other than England and were transported to the colony of New South Wales.